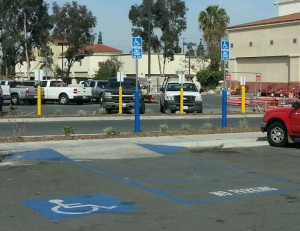 Even staunch supporters of the American’s with Disabilities Act and it’s California corollaries now widely acknowledge that these laws are being abused. A few lawyers and plaintiffs bring the bulk of the state’s disabled access lawsuits, typically relying on the expense of litigation rather than the merits of their claims to extract disproportionate settlements from mostly small businesses. This is not to say all plaintiff disabled access cases employ abusive tactics.  There are attorneys who bring important cases or cases that seek redress for real harm.  However, there is a cottage industry of lawsuits that profiteer in a way that has little to do with righting wrongs.  There have been several attempts to reform California laws in a way that will maintain the intent and effectiveness of these laws while at the same time reduce abusive lawsuits. Some were never signed into law as a result of staunch opposition from the disabled community and others have passed but have been relatively ineffective.  This article offers a new legislative strategy for California but first some background:

California is the only state to award essentially a bounty — typically between $2,000 and $4,0000 — for even the most minor discrepancies from new construction access standards. As a result 40% of all access lawsuits in the entire country are filed in California. Moreover, as more fully detailed in previous articles on this blog, plaintiffs abuse a loophole in the law to sue businesses in buildings that pre-date the ADA for deviations from new access standards, even though the buildings comply with the access standards in force when they were constructed. Nevertheless, meaningful reform has been hard to come by. For example, for more than a decade, business groups have sought a requirement that they be provided notice and an opportunity to remedy the alleged access issue before plaintiffs can sue them for a monetary recovery. As reasonable and modest as such a proposal sounds, it has been defeated in multiple attempts. Disability groups fear “the slippery slope,” i.e., that even reasonable reform will lead to an erosion of disabled access rights.

Much of what makes access litigation so expensive for defendants is that in settling a lawsuit, not only must they pay their own attorney, but they must pay the plaintiff’s attorney as well. Accordingly, in typical settlements, in addition to the $4,000 fine in the law, a defendant pays thousands more in “plaintiffs attorney fees.” Thus cutting out this attorney fee layering would do much to reduce the abusive aspects of access litigation.

Interestingly, it appears that the California legislature intended that many of these lawsuits be brought in Small Claims Court in enacting Civil Code sec. 52.2, which specifically gives gives the Small Claims Court jurisdiction of disabled access cases. Certainly, the “minimum damages” penalty of Civil Code secs. 52(a) and 54.3, which top out at $4,000, are within the Small Claims jurisdiction. Additionally, Code of Civil Procedure sec. 1033 enables the court to penalize plaintiffs for filing in jurisdictional classifications made for larger financial claims by denying them prevailing party attorney fee recoveries. Unfortunately, these cases are rarely brought in Small Claims Court. Moreover, plaintiffs suffer no consequence for evading these procedures. Plaintiffs’ attorneys accomplish these abusive higher filings in two ways: 1) They argue that only the highest jurisdictional classified trial courts (>$25,000 in state courts and >$70,000 in federal court) may hear cases seeking “injunctive relief,” i.e. lawsuits that not only request money but also request that a defendant “remove access barriers”; and (2) They file their cases in federal court which do not have small claims courts. Both these practices essentially rely on artifices. First, plaintiffs rarely request that a business remove an alleged access barrier prior to  filing thus there has been no refusal by a business and thus no need for an injunctive order by a court. Second, federal courts can provide no relief not available in state court so plaintiffs filing there are engaging in the judicially disfavored practice of “forum shopping.”

However, while it is generally true that in state court, the two jurisdictional classifications between Small Claims and Civil Unlimited cannot hear injunctive relief cases, the same may not be true of Small Claims under Civil Code 52.2. Since that section specifically states that Small Claims courts have jurisdiction over access barrier cases brought under California law, it is reasonable to conclude it includes injunctive relief, which is part of those laws.

A relatively modest and neutral clarification in these provisions could reduce the abusive tactics employed by serial filers:    Strengthen and clarify that the Small Claims court and lesser economic jurisdictional courts (e.g., Civil Limited under $10,000 / $25,000) have jurisdiction over access barrier removal injunctive claims.  Why would this proposal succeed where others have failed?  It does not lessen the plaintiff remedies – neither injunctively nor monetarily. In fact, it may even increase plaintiff net recoveries as they will no longer have to share their recoveries with their attorneys if they file in Small Claims court. For those cases, both sides would proceed without attorneys thus cutting out much of the cost burden.  It has the potential to remove much of the gouging and abusive practices that inflate the costs of these lawsuits above the statutory recoveries. It also lessens the burdens on our courts.

Another modest amendment, albeit less neutral, would be to require plaintiffs to make a pre-lawsuit written request for barrier removal as a pre-requisite for suing for the sec. 52(a) or 54.3 monetary penalty.  Plaintiff could still sue for injunctive relief, but not nor the statutory “bounty” without showing that a defendant is ostensibly “refusing” to remove a barrier by ignoring a notice  While this proposal has been made and failed, it has such inherent fairness and logic, it should always remain a center-piece of any reform legislation, especially since the flawed reasoning of California Supreme Court opinion in Munson v. Del Taco held that non-conformance with new construction access standards are exempted from the intentional discrimination prerequisite applicable in all other discrimination cases in order to be subject to the California Unruh Act minimum $4,000 penalty.

While plaintiff attorneys generally have strong lobbies, the number of attorneys bringing disabled access cases is relatively small, despite the high number of cases. There is evidence that they don’t enjoy much support from the rest of the plaintiff’s bar because of their abusive practices. Much of this proposal is already in the law and just needs strengthening and clarification.

This site uses Akismet to reduce spam. Learn how your comment data is processed.